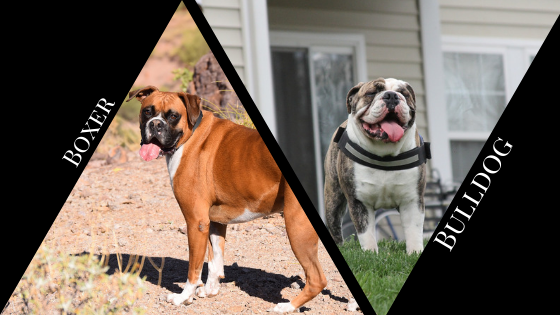 It’s hard not to love the Boxer or the Bulldog, but which dog breed will fit you or your family best? Today, we’ll match up the Boxer vs Bulldog to help you make an informed decision. Both dogs have wrinkly faces you just want to squeeze, but when it comes to personality, it can be a night and day difference.

Of all dog breeds, the Boxer has the longest tongue (recorded as long as 17”). What’s not to love? This fun and playful breed originated from the German Bullenbeisser, a now extinct breed that was used for seizing large game like wild bears.

The origin of the name “Boxer” is obvious if you spend time with a Boxer. They love to “box” with their front paws in a playful manner.

Typical coat colors include white, brindle, or fawn. The average weight range for adult Boxers is anywhere from 55 – 70 pounds. For height, expect this dog to grow to around 21 – 25 inches. 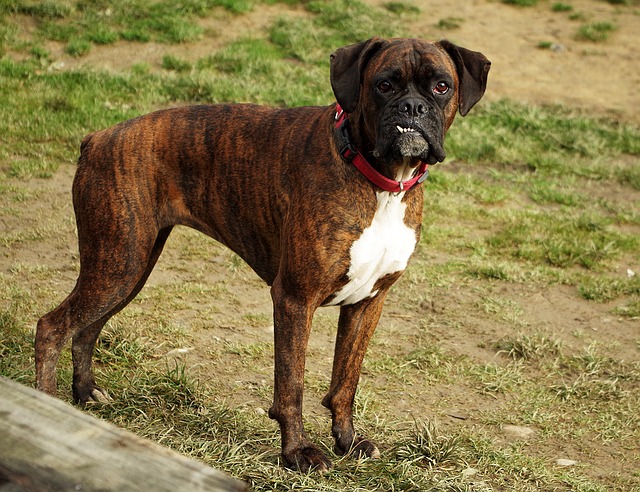 For general intelligence, Boxers would probably be considered average by most standards. You don’t need to be a dog training expert to instruct a Boxer, but don’t expect him or her to learn it all instantly. As always, finding the right motivators is key with training a dog.

The Boxer is a dog breed that’s high-energy and hilarious. Imagine an energetic toddler that never grows up. That’s the Boxer. They love to play, and their happy personality is contagious.

Boxers are typically good family dogs, if trained appropriately. However, if you have very young children, it’s not hard to imagine a boxer running down a hallway in excitement and knocking over a child.

It will vary from dog to dog, but most Boxers have a watch-dog instinct. They’ll be vigilant for their pack, and bark whenever someone comes close. Some Boxers love strangers, others need time to warm up. This is often dependent upon early socialization.

Learn about the BarkBlaster, the humane bark control sprinkler.

Maintaining the coat of a Boxer is incredibly easy. Face cleaning is recommended to avoid infection.

You’ll need to keep a Boxer busy and active if you expect good behavior. To leave a Boxer in the yard 24/7 without any attention is a setup for failure. Boxers do best in stable climates. They don’t handle extreme heat or extreme cold very well.

The lifespan of most Boxers is around 10-12 years. However, cancer rates are very high in this breed. If you want to own a Boxer, anticipate frequent trips to the vet. 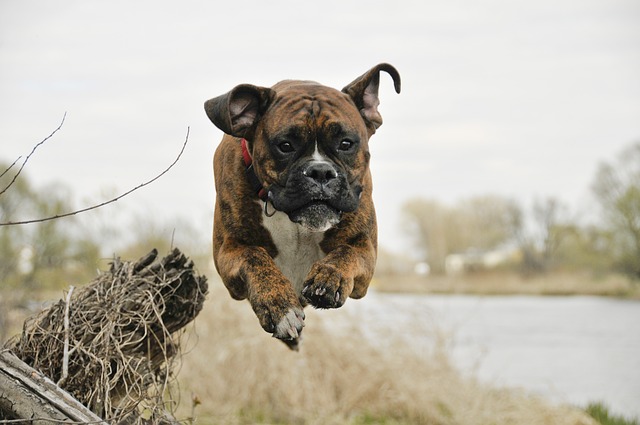 We’re going to focus specifically on English Bulldogs. Bulldogs are beloved by many, from the Georgia mascot to Mack Trucks.

Cocky and determined, English Bulldogs have a personality that’s also hard to resist. With it’s big head, powerful shoulders, and tight rear, there’s nothing like this in nature. The breed was completely fabricated by man. Beware, they snort, burp, and far with the best of them. It’s quite entertaining to just sit and watch a bulldog.

Early Bulldog history traces to 13th century England. They weren’t quite as cute and cuddly then. They were bred to take out bulls. These 80 pound dogs could literally take out a bull that weighed nearly a ton. Since then, English Bulldogs have been bred toward companionship rather than fighting ability. You can expect today’s English Bulldog to measure in between 12-16 inches, and weigh between 40 and 55 pounds. 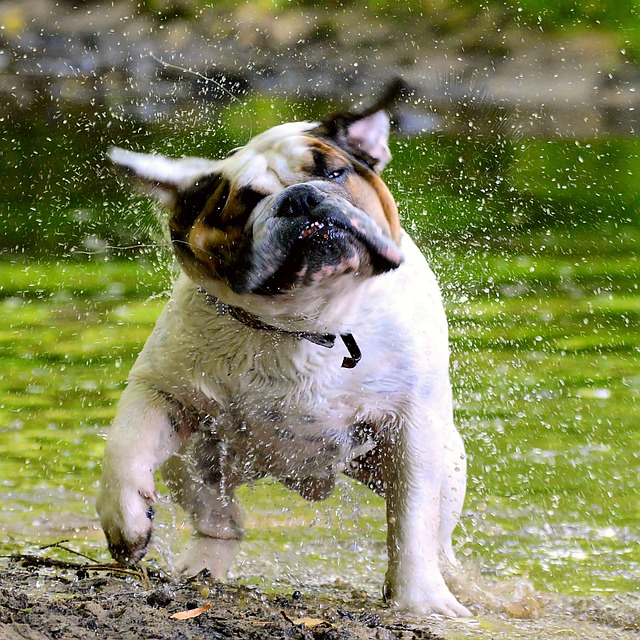 English Bulldogs can be stubborn. This stubborn attitude is often mistaken for lack of intelligence, but this typically isn’t the case. Training can be a challenge, especially to an individual with no dog training experience. Most Bulldogs won’t respond well to a strong hand. Food and positive reinforcement are the best training tools.

Bulldogs typically lean-to-please. As puppies, English Bulldogs are very energetic, but they typically mellow out with age. Adults will typically prefer a lazy day with belly rubs, rather than a long run at the park. They form strong bonds with their human packs, and do very well with kids. Early socialization is important, as they can be dog-aggressive. Most Bulldogs are protective and loyal. Anti-bark training may not be needed, as they aren’t typically known for excessive barking. 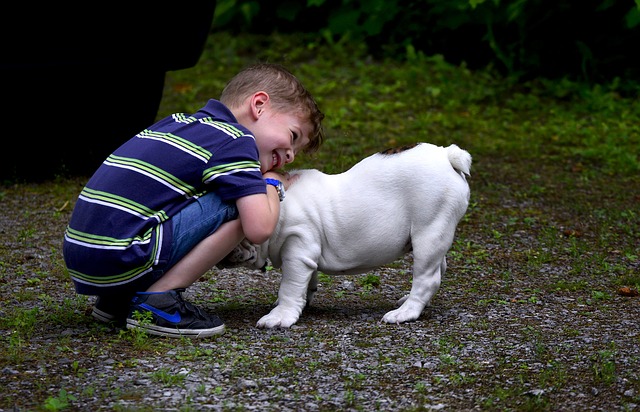 English Bulldogs don’t need constant exercise. In fact, excessive exercise in warm weather can be dangerous due to their short-nosed anatomy. However, without exercise and diet control, these dogs can easily succumb to obesity.

Occasional grooming of a Bulldog’s coat is fine, as they only shed minimally. All those face wrinkles must be cleaned thoroughly. If not, infections could develop.

Be advised, they are often unable to give birth naturally, due to their size and shape.

When comparing the Boxer vs Bulldog, there are quite a few minor differences. At the end of the day, there’s one major difference.

If you want a running buddy? Buy a Boxer. Want a cuddly companion? Stick to the bulldog.

Price is also worth considering. Here are rough estimates of what you might pay for a English Bulldog or Boxer puppy:

Both dogs are adorable, and with correct care and training, will be an incredible companion for you and your family for years to come!

Which breed would you rather own? Let us know in the comments below!